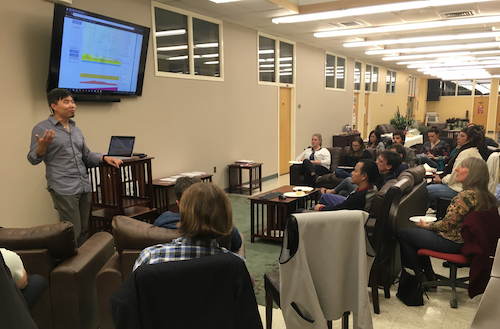 Last night was the first of this academic year’s “Featured Research Evenings”, which showcased the work of Dr. Jin Xing, Associate Professor of Genetics here at Rutgers. Jin discussed how the significantly declining costs of genome sequencing is facilitating many new research opportunities, such as clarifying phylogenies (evolutionary trees), the action of natural selection to produce adaptation, and population-level phenomena (such as disease occurrence, divergence times, the nature of extinct ancestors). One of the projects in which Jin has been involved recently is examining genetic diversity in the genus Macaca, which comprises more than 20 species of macaque monkeys in Asia and north Africa. The research has greatly improved our understanding of the genetic diversity and evolution of this group of primates as well as general principles of evolution. It was a very rewarding discussion, one consequence of which was generating ideas for some new lines of research (and teaching) for some of the other CHES members present.