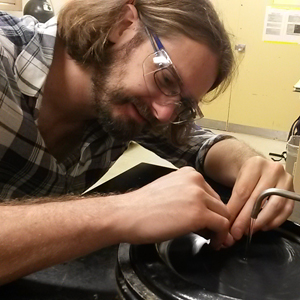 CHES PhD student Fred Foster just published with coauthor P.J. Constantino a paper testing the hypothesis that wear resistance of tooth enamel changes as a tooth is worn down. Fred and his collaborator applied the microscratch test to the surface of three transverse sections cut through molars from an olive baboon, each of which simulated different degrees of microwear. The research, funded by CHES, showed that as macrowear accrues, the ability of baboon tooth enamel to resist microwear changes, such that a moderate degree of macrwear offers the best resistance to microwear. In the first use of helium ion microscopy to study tooth enamel, Fred imaged prism orientation at each of the three sample surfaces, which generated evidence suggesting different mechanical processes may be involved in the removal of enamel due to microwear, depending on the extent of microwear. The paper can be found at: