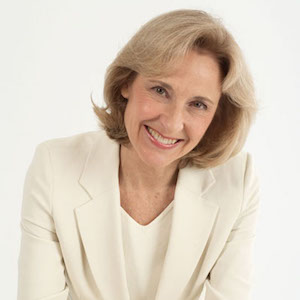 ACADEMIC BIOGRAPHY
Helen Fisher, a biological anthropologist, is a Visiting Research Professor and member of the Center for Human Evolutionary Studies in the Department of Anthropology at Rutgers University. She is currently working on a book to be published by Henry Holt on mate choice. The book stems from her current work as Chief Scientific Advisor to the Internet site, Chemistry.com, where she has collecting data on some 500,000 individuals. Her most recent book was Why We Love: The Nature and Chemistry of Romantic Love (Henry Holt 2004; paperback 2005). It discussed her research project with colleagues in which she used fMRI brain scanning to investigate the brain circuitry of romantic love.

Her other books include:

Dr. Fisher has been on the national and international lecture circuit since l983 discussing the evolution of human sexuality, romantic love, marriage and divorce, gender differences, and the future of men and women in business and family life. During 1994-95 she lectured on college campuses as a Visiting Scholar of the Phi Beta Kappa Society. Her publications include articles in Journal of Comparative Neurology, Journal of Neurophysiology, Philosophical Transactions of the Royal Society: Biological Sciences, American Journal of Physical Anthropology, Human Nature, The New York Times Book Review, Scientific American, New Scientist, and books published by Smithsonian Press, Columbia University Press, Cambridge University Press, Rutgers University Press, MIT press and Yale University Press Since l983 Dr. Fisher has served as an anthropological commentator and/or consultant for businesses and the media. Her contracts include those with NBC's Today Show, Canadian Broadcasting Corporation, and the BBC. She had a daily radio spot on The Good Life network, Sirius Radio, in 2007; she was also host of a four-part radio series for the BBC World Service, 2004, a four-part TV series for Turner Broadcasting Systems, 1995, and commentator on a 10-part series for The Today Show (NBC), 1984-85. For her work in communicating anthropology to the lay public, Helen received the American Anthropological Association's "Distinguished Service Award."

CURRENT PROJECTS
I am currently Chief Scientific Advisor to Chemistry.com, an Internet dating/relationship site which is a subsidiary of Match.com. In this capacity I designed a 56-item questionnaire to investigate some biological aspects of personality. I am using these data to explore human patterns of attraction and mate choice. Some 1.6 million individuals participate in this dating service and I have collected personality data on 523,000 of them, as well as date on attraction (after a first meeting) among 3,000 individuals. Preliminary analysis suggests that humans are attracted to those with complementary traits of temperament, data that suggests we are unconsciously drawn to individuals with whom we can create genetic variety in our offspring. I also collected personality data on 500 married couples (average length of marriage 16 years). These data suggest that humans also marry and breed with individuals who have an array of complementary, rather than similar, traits of temperament. I am also completing the analysis of the fMRI data that I and my colleagues collected on 15 men and women who had just been rejected in love.

CONTACT INFORMATION
This email address is being protected from spambots. You need JavaScript enabled to view it.

Fisher, HE (2006) The Drive to Love: The neural mechanism for mate choice. In The Psychology of Love, 2nd Edition. JR Sternberg and ML Barnes (Eds.) New Haven: Yale University Press

Fisher, HE (2006) Broken Hearts: The Nature and Risks of Romantic Rejection. In Romance and Sex in Adolescence and Emerging Adulthood: Risks and Opportunities. A Booth and C Crouter (Eds). Pp 3-29. New Jersey: Lawrence Erlbaum Associates

Fisher, HE (2005) Dumped! The Nature of Romantic Rejection (New Scientist, 181#2434:41) reprinted in This Is My Best, Anthology of the Quality Paperback Book Club, New York: Bookspan