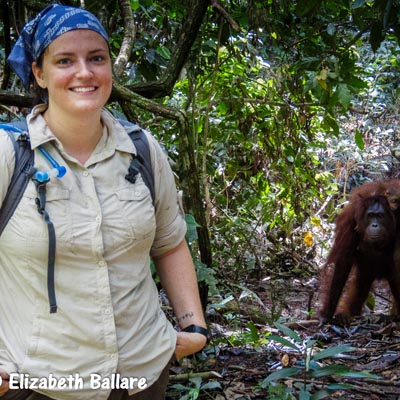 Wild orangutans are found only in Borneo and northern Sumatra. With increasing anthropogenic activities in these regions, both species (Pongo pygmaeus spp. and Pongo abelii) are listed as critically endangered. Rehabilitation and release programs have become a critical component of the Species Survival Plan. These management procedures place orangutans into new environments where they must quickly adapt to changes in enrichment, social structure, mate choice, and diet. Millions of dollars are spent on medical care, release, and informal observation of these individual orangutans, and yet we still know very little about how the health of these animals varies during the rehabilitation and release process.

This research systematically measures protein, energy balance, stress, and immune responsiveness from urine samples, as well as gastrointestinal parasites in feces throughout she rehabilitation process and after release at two sites operated by the Borneo Orangutan Survival Foundation in Central Kalimantan, Indonesia: the Nyaru Menteng Rehabilitation Center and the Bukit Batikap Conservation Forest. These data will be directly compared to corresponding data from a wild population that has been studied by Dr. Erin Vogel and colleagues for nearly 15 years at the Tuanan Orangutan Research Station, also in Central Kalimantan. Ballare’s goal is to better inform release monitoring methods and thereby improve significantly the orangutan’s chances of survival in the wild. 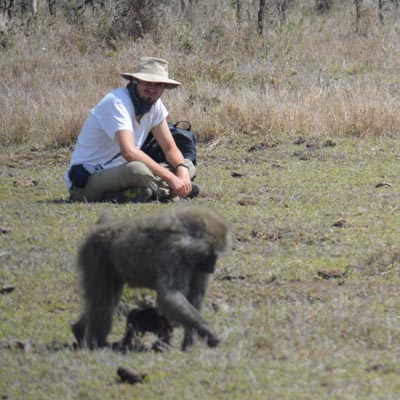 It has long been appreciated that “personality” describes consistent individual differences in behavior and cognition, and studies of humans additional suggest that personality-based attributes strongly affect the quality of individual social bonds. Central to this framework is the stress response system, an organism’s way of regulating behavioral and physiological reactions to challenges – or stressors – to maintain physiological stability.

This research examines how consistent individual differences in handling stress both affects and is affected by social life among wild olive baboons (Papio anubis) that have been studied by Ryne Palombit and students for many years. Pritchard will use systematic observational techniques, field experiments, social network analysis, and fecal hormone collection to measure individual differences in psychologically defined coping styles and coping outlets, basal glucocorticoid levels, and sociality. He’s particularly interested in the consequences of these differences for understanding the stability of the complex social relationships and coalitionary support system for which olive baboons are famous. His measurement of variation in stress hormones will add a valuable physiological dimension to this analysis of personality and social network. This study will contribute significantly to the growing data base on the phenomenon of “personality” in nonhumans, the eventual development of a unified evolutionary theory of personality, and our understanding of humans through study of a nonhuman primate characterized by pronounced behavioral variability and social complexity.